Working with Bamboo and Resin

Working with Bamboo and Resin

These were planted after a particularly bad year of hurricanes took out some fantastic shade trees. Since I didn’t want to wait around 30 more years to have some shade in the back yard, I visited my local bamboo supplier, Tropical Bamboo and dropped a few plants around the yard.

After three or four years, I started to get culms (the poles) big enough to start doing things with them. There are all kinds of different projects you can complete with bamboo from building a fence along your property to making a deer scare. Here are a few books I’ve gotten to educate myself on Bamboo and what I can do with the stuff.

One of the things I always wanted to do with the bamboo was to make some pens out of the culms and branches of the smaller varieties such as the Asian Lemon Bamboo. If you didn’t know, bamboo grows with a hollow space in the center. I figured since they were already hollow, I could just drill to the appropriate pen tube size and go.

Turns out finding a piece of bamboo that has a good balance between wall thickness and hole size was harder than I thought. Solution? Cut into chunks. 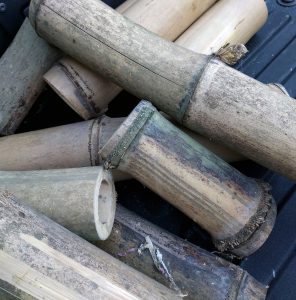 The first thing I did was cut some older culms down and cut them into shorter poles by cutting out the nodes (the joints) so I was left with hollow tubes. I set them up in the garage and let them dry out for several months. I didn’t notice a ton of cracking with the poles while they dried but it didn’t matter for my purposes as I was trimming them down anyhow. 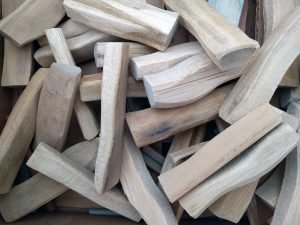 Once the poles were as dry as they were going to get, I began to process them further by cutting each tube into about 3 inch lengths. From there I would then cut them lengthwise into about 1″ x 3″ chunks on the band saw.

Once I had these manageable chunks, I took them to the belt sander with a 60 grit belt to remove the outer waxy layer and give them a little shape instead of just straight lines. IMPORTANT: If you are going to use bamboo in any sort of resin you will want to remove that outer layer so resin (or glue) can adhere to the surface.

After the bamboo was sanded down and all the surfaces roughed up, I dried a batch of pieces in the oven and then soaked them in some Cactus Juice (stabilizing resin) under vacuum for an hour or two. I then put them back into the oven to harden the resin. This process simply helps minimize how much the bamboo expands or contracts in the finished product. I did several batches this way with some bamboo being dyed different colors. For more information on ways to stabilize wood, there are plenty of videos out on YouTube.

Once the chunks of bamboo were cured, I gave them a once over on the belt sander again to knock off any chunks of resin and get them slightly roughed up. Again, in my experience it is important not to have any “slick” surfaces so the resin can adhere solidly. 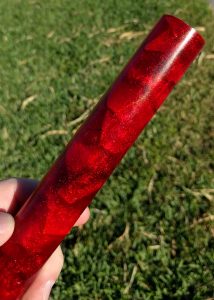 For pen blanks, I cut down these chunks into small cubes which would fit into my PVC tubes. For casting the pen blanks, I mixed up a small batch of Alumilite Clear and added some dye and metallic powder to give the pens some sparkle. When pouring the resin, I had better results filling the PVC tube about a 1/4 of the way and then inserting the chunks of bamboo. I would go back and forth adding resin and chunks until the tube was about 90% full. Note that the bamboo is going to float on you so you will want to tape down the top so the chunks stay evenly dispersed through the tube. Once filled, I moved the blanks into a pressure pot and cured them under pressure to collapse the air bubbles. Here is a helpful video on using PVC. Here is one on the overall process. 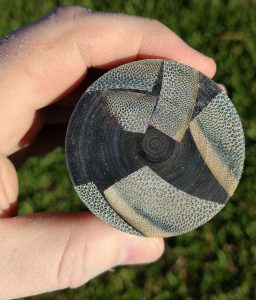 For my shaving brush blanks, the process is largely the same. The difference being that I use the larger chunks of bamboo instead of the small cubes. When using the larger chunks, you still want to hold them down when casting as they will want to float on you as well.

Turning and Finishing the Blanks

For the most part, these blanks are going to turn on the lathe just like any other “worthless wood” blank. As I mentioned earlier, you do run the risk of having the resin separate from the bamboo if the slick outer layer of the bamboo was left in place. As long as you sanded it off, you should be fine. If not, be sure you are wearing a face shield as chunks of resin could come flying off. 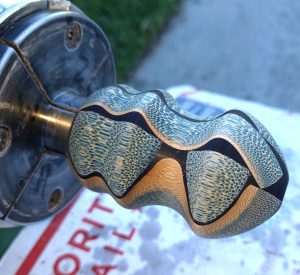 The one thing you want to be aware of is that the bamboo will come off much more easily than the harder resin. On a few of my earlier pieces I ended up with the bamboo portions having dips creating an uneven service. When turning and especially sanding, take care that you apply even pressure. When sanding pens, I found it helpful to use a sanding block rather than using my fingers. For sanding shaving brush handles, I took care not to press too hard on any single spot.

While not my favorite finish to work with, I’ve had best results using CA glue as a finish. Even though the bamboo was treated with the Cactus Juice and cured, it still remains fairly porous. Putting several layers of CA glue ensures the surface is completely sealed and extremely smooth to the touch.

The sanding process is the same for both my pens and shaving brushes. I’ll sand the blanks down to about 400 grit at a slow speed on the lathe. Next I’ll apply a liberal even coat of CA glue to the surface and allow to dry. I’ll put on multiple coats of glue and sand between each coat until I’ve built up a solid coating. Once the coating is thick enough, I work through higher grits until I get a nice shiny surface going. This polishing paper set from Zona is great for this purpose and a single package lasts a long time.

Once the blanks are polished, the assembly is the same as any other material. Here are a few examples of some finished products with bamboo mixed into the resin. 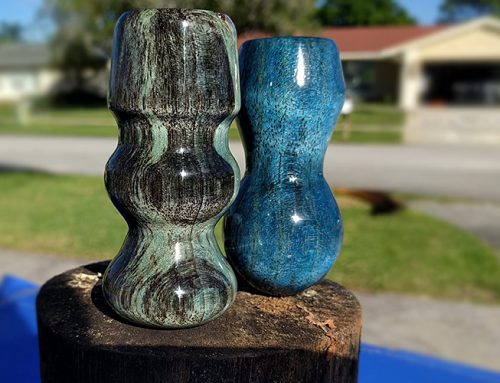 What goes into making a shaving brush?